Pickering’s manual differed from its contemporaries by explaining the role of music in the soldiers’ drill in much more detail.

A simple read of the eighteenth-century military manuals gives a good idea of what was expected from the common soldier.  But the picture they paint isn’t very clear.  How closely were the manuals followed?  How were the troops taught?  Were other practices utilized to augment the manual exercise?  To understand the directives in the manuals, we’ve got to look at other sources as well.  Orderly books, correspondence, diaries, and newspapers — especially newspapers — tell us what the manuals don’t.

To the Army.  Directions how to perform the manual exercise by music.

First, let a march, such as God Save the King, Carbinier’s, or The Dorsetshire, to be fixed for the above purpose; but any other tune may do that [if] set to music in common time, i.e. having four crochets (or other notes equal thereto) in a bar.

2dly, Order one of these tunes to be blown either on the trumpet, fife, clarionet, or on some other wind instrument, and set those whom you would first learn by this method to march without arms for some time by the said tune, in order to ground them thoroughly in the several beats of the same, till they can march by them with ease and without constraint.

3rdly, Now you may venture to let them take up their arms, and shoulder; then order the first strain, or part, of the tune to be played in piano, or soft, the men standing fast.

4thly, the music to begin the second time, forte, or loud; at the same instant the manual exercise to begin, and be continued till the whole is ended, keeping the same exact time [between] each motion as was done in marching.

5thly, An exception or two must be made to the last general rule, viz. when the ramrod is half drawn out, and seized back-handed, double time, or two beats, is to be allowed in clearing it off the pipes, turning, and pointing in the barrel.

6thly, The same portion of time is likewise to be allowed for drawing it out of the barrel, turning and guiding it down the loops.

7thly, In the second motion of charging bayonets, the music must dwell a little on that note (called a hold) in order to gain time to bring the firelock down to its proper attitude.

It is practicable to bring, not only a battalion or a regiment to exercise by the aforesaid rules, but a whole army, consisting of at least 50,000 men, and with such accuracy and perfection in point of time, as cannot be executed by any other method hitherto found out; the due performance of which will most pleasingly affect the glowing breast of every spectator, as can be better felt than demonstrated.

This essay fills in many of the blanks left unaddressed by the military manuals, most importantly those concerning the value and use of the field music.  Other than a list of “Beats of the Drum,” most late-eighteenth-century military manuals mention the field music vaguely, if at all.  However, here in this essay the writer presents the function of the field music in more detail.  Not only did the music assist the soldier in learning the manual exercise with “accuracy and perfection,” it did so better than “any other method hitherto found out. ”

For present-day scholars who argue that drummers dominated the the field music to the point where fifers were considered a luxury that provided “musical interest” only, it is important to note that the writer of this essay ascribes an equal if not greater significance to the fifers  He advises that the “common time” march used to initiate the exercise be “blown” on a “wind instrument,” not beat on the drum.  Accompaniment by the drummers, though, is implied, since they, too, are part of the field music.  He suggests other suitable wind instruments that could be used, perhaps in the absence of fifers; however, he includes the fife in the list of clarionets, trumpets, or “some other wind instrument.” He offers no performance advice to the drummers, instead focusing upon the fifers (or other wind instrument players), who are told when to play piano, when to play forte, and when to “dwell a little on that note (called a hold).” 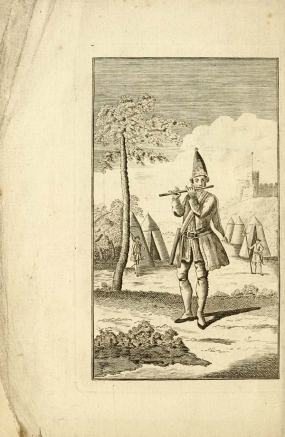 Clearly, the writer expected some degree of sophistication from the field music, both in general terminology and in performance practice.  That was the only way they could guide “a whole army of 50,000 men” through the manual exercise with “accuracy” and “perfection in point of time.”  Music is powerful only when well performed, and it is obvious that the writer believed in the power of the field music to inspire the men to do their best and “most pleasingly affect. . .every spectator.”

Of particular interest to me as an Ancient historian, however, is the writer’s final comment, that the field music’s effects could be “much better felt than demonstrated.”  While “trumpet[s], clarionet[s] (or other [suitable] instruments” may have rendered the suggested tunes much more melodically than the simple-system, straight-bore fife then in use, they could never achieve the stirring emotional response produced by the combination of fife and drum.  The distinctively patriotic aura that embodied the eighteenth-century field music took their music to a higher, more powerful level, a phenomenon that the late music historian Arthur Schrader called emotional baggage.  The emotional baggage inherited by the Ancients from their progenitors in the early American field music is clearly evident in their music, dress, and drill even today and in my opinion contributes in no small part to their popularity and, more importantly, longevity.

April 2019, (c) History of the Ancients Dot Com.  All Rights Reserved.  This article is dedicated to Kate van Winkle (“Kitty”) Keller, 1937-2018, who devoted her life to the furtherance of early American secular music, both by her many excellent contributions to the subject and her unfailing encouragement to those following in her footsteps.  Thank you, Kitty!

What Do You Think?

Not Ancient but Fun Nonetheless

Other Ancient Sites and Blogs